Hello friends! I was delighted to create a tutorial as part of the #MakingItAtHome Challenge! During the last five weeks of Covid-19 quarantine, our friends Amy Poehler and Nick Offerman have hosted themed challenges, presenting makers across the country an opportunity to win a $1,000. donation to their local food bank courtesy of NBC.

For this fifth and final installment, our theme was Totally Tubular – a call to craft something spectacular out of recycled toilet paper and paper towel tubes. In my mind, paper tube crafts are a classic childhood DIY and I love creating imaginative marionettes out of this humble material. You’ll find my written instructions below, followed by a video recording of my IG Live takeover on the @nbcmakingit Instagram feed.

1. One of the toilet paper tubes will become the body of the marionette and the second will be cut down to create the head.  Using scissors or a craft knife, carefully cut the second toilet paper tube to approximately 1/2 to 2/3 it’s original length.

2. In order to attach strings to the body and head, create small holes in the tubes using a paper punch.  Make a hole in the head near one edge, roughly between where the ears will be located.  Make two holes in the body – one in front of where the tail will be located and one on the opposite end of the tube, making certain to leave about 3/4″-1″ between this hole and the edge of the tube as the neck will be positioned in this space.

The name of the game here is improvising! Get creative and use the materials and tools you have at home.  Don’t have a 1/8″ paper punch? Use a 1/4″ punch or create hole using the tip of your scissors, your craft knife or even the point end of a toothpick!

5. Select a paint color, paint the body and the head and allow to dry completely. You can suspend the pieces from a coat hanger to dry, preventing the paint from sticking them to your work surface. Create a bolder solid color by applying two or three coats, allowing the paint to dry between each coat.

6. The four legs and neck are created from two colors of lightweight card stock paper – alternately, you can use construction paper or colored copy paper. Cut the paper into 3/4″ wide strips – you’ll need one strip of paper in each color for each leg/neck.

To create the first leg, glue the ends of two strips of paper together creating a 90 degree V-shaped formation.  Allow a few minutes to dry. Once dry, fold one strip of paper over the other (beginning at the point where they’ve been glued together) and press the fold flat. Then fold the second strip over and press the fold flat. Continue folding, alternating between the two strips of paper until you reach the ends. Glue the ends of the strips together. Consider holding the fold paper in place with a clothespin while the glue dries. Once dry, remove the clothespin and cut away any excess paper. Repeat these steps to create four identical legs and the neck. 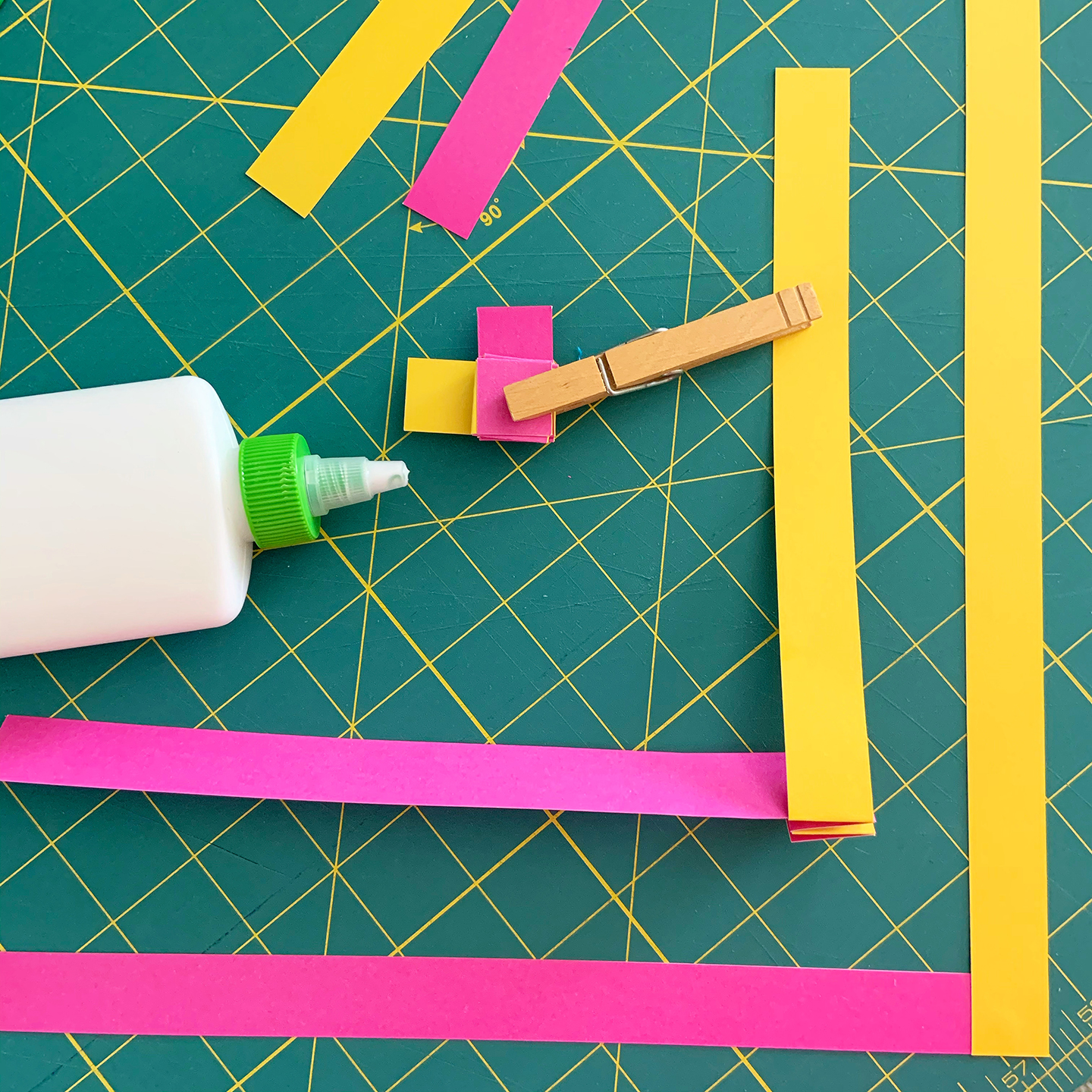 7.  Attach the legs and neck to the body of the marionette using hot glue. As you attach each piece, hold in place for a few seconds allowing the hot glue to set before moving on to the next. Next hot glue the top of the neck to the underside of the head.

8.  Create a hanging structure for the marionette from two craft (popsicle) sticks. Jumbo craft sticks are ideal if you have them!  Glue the two piece together with white craft glue create an X-formation. Consider holding them in place with clothespins while the glue dries.

Once the glue is dry, create holes in the sticks – though which the string will be tied. All of the holes will be created in just one of the sticks. Using a 1/8″ hole punch, create a hole in one end of one stick (this will be for the head), create a second hole right in front of the crossed stick (this will be for the front of the body) and a create a third hole at the opposite end of the stick (for the tail end of the body).

10.  Cut two circles from white paper and two smaller circles from black paper to create the eyes. Glue the black circles to the white circle and then glue on either side of the head. A great alternative to paper eyes is googly-eyes if you have them!

Next, select a piece of colored paper, similar in shade to the color of the marionette, cut into a small 1-2″ square and fold in half.  Cut an ear shape along the fold.  Unfold the shape and cut in half to create to identical ears.  Glue the ears to the top back of the head.

11.  Pom poms!  Attach pom poms to the underside of each leg, on either side of the ears and one on the back of the body for the tail. Use store bought, readymade pom poms or consider making  your own – here’s a tutorial that shows you how (or scroll down to see the embedded video!)

12. Finally, create a saddle blanket to lay over the back of the marionette, positioned between the two strings. Cut a rectangle of card stock paper and adhere a series of colorful paper strips with white craft glue to create a stripe pattern. Consider adding slightly wider strips along the two shorter ends and fringe them with scissors to resemble fabric. Once completely adhere to the back of the marionette with white or hot glue. 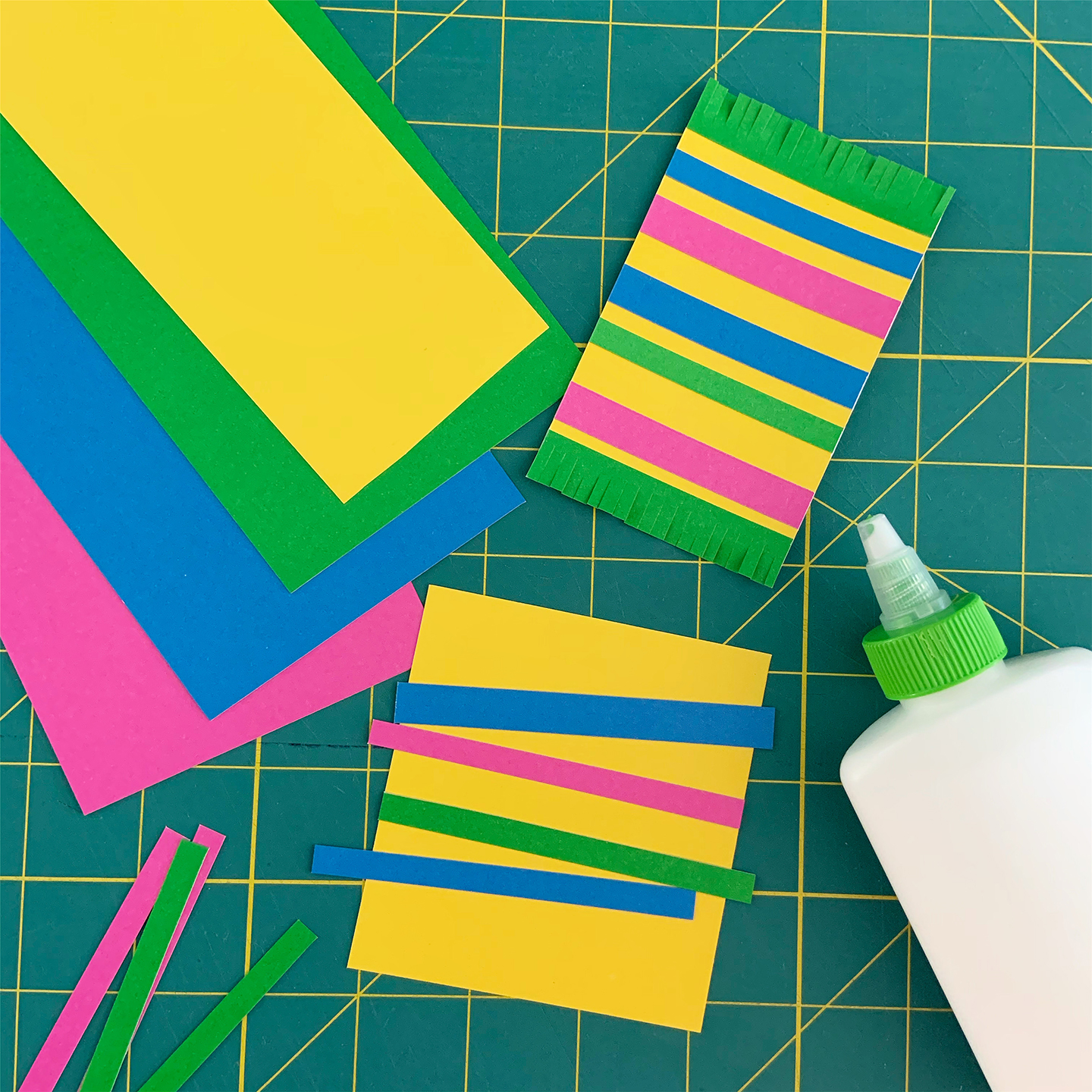 And that’s it, my friends!  I hope you’ll have fun putting your own spin on this project.  And if you post your marionettes online, please tag me @robert_mahar – I’d love to see what you’ve made! 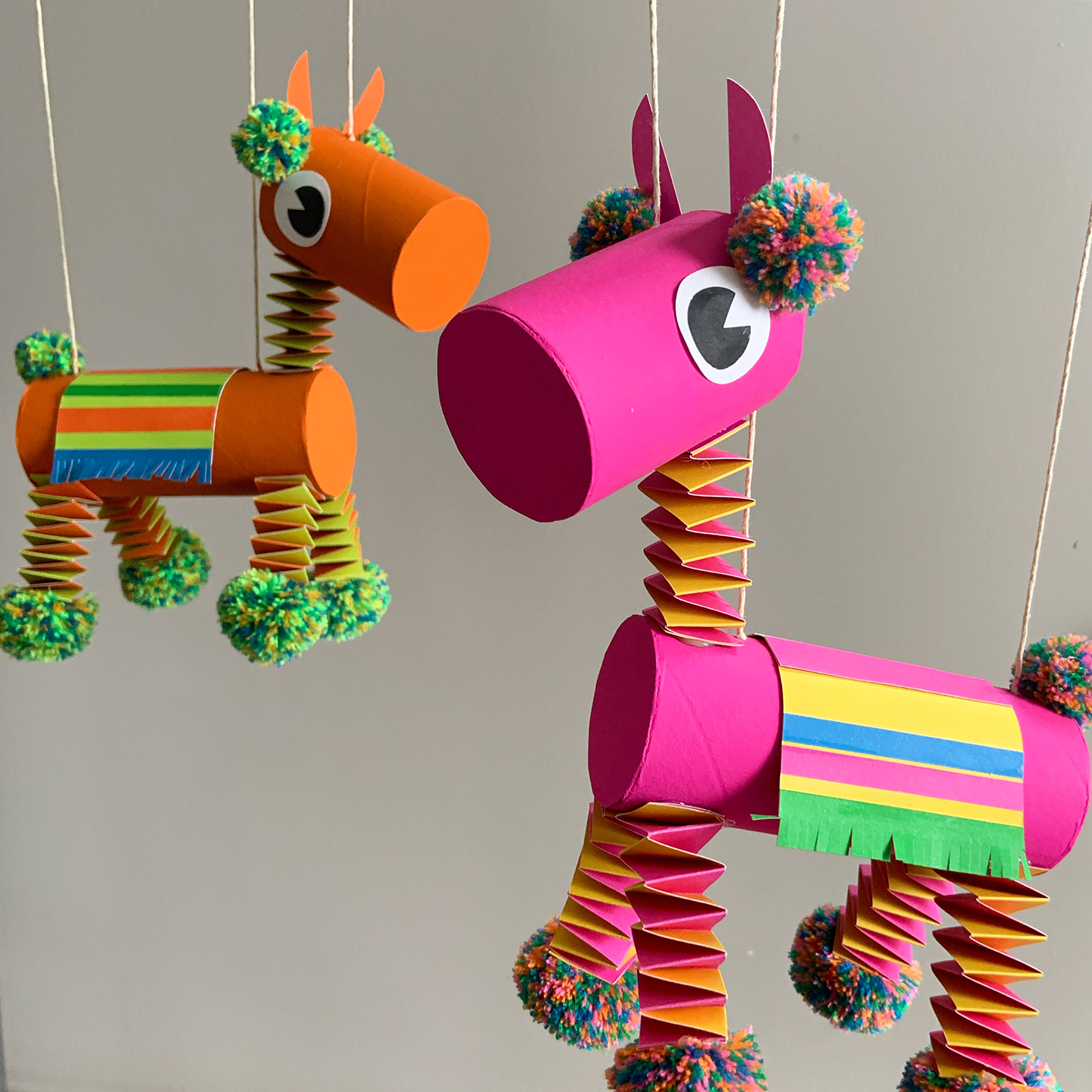